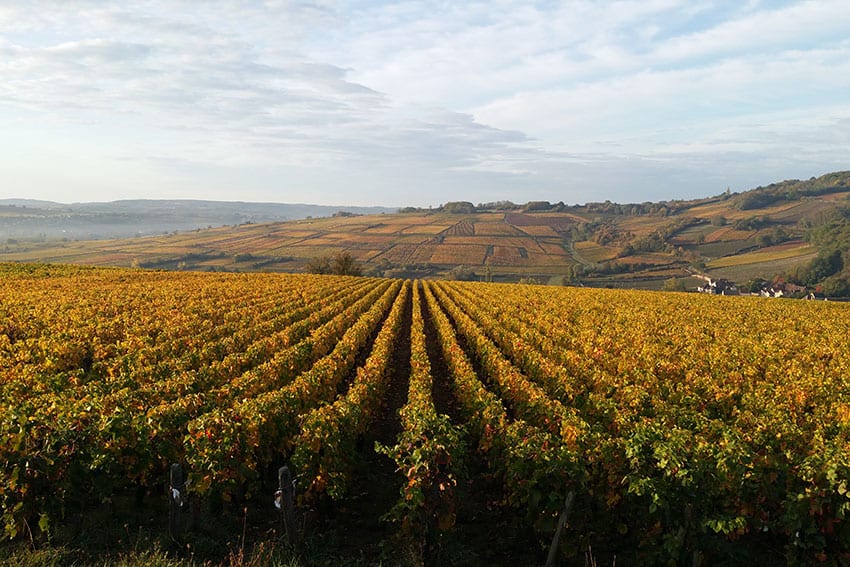 There has been talk over the past year of the 2018 vintage in Burgundy being one of the greatest of all time.  Comparisons with the mythical 1947, and all that. But let’s be careful and take a closer look.

We’ve tasted some marvelous wines, both white and red, and from all of the appellation levels.  Purity and concentration would be the key words across the board.

But lest we forget, 2018 was the hottest vintage in Burgundy since 2003.  And frankly, we were expecting wines like we got in 2003: flabby whites and Cote du Rhone-like reds.  But that did not happen. And the secret to understanding 2018 Burgundy lies in understanding the difference between these two very hot years.

If you look at 2018 from start to finish, not only was it hot, it was dry: 50% less precipitation than the annual average over the past 30 years. However, if you were here in the early part of the year, you’ll certainly remember the rain.

After a very dry summer in 2017, winter 2017-18 was wet. It rained nearly every day through March and into April.  And the vine was slow to bud.

That all changed in the middle of April. Wet soil and higher temperatures brought on explosive growth in the vineyards that the vignerons had a tough time keeping up with.  In a week we went from bud burst to unfurled leaves.

The first flowers burst in mid-May. The crop set regularly with very little disruption, and summer settled in. The early wet conditions followed by April’s warmth saw the onset of mildew, but the fungus never stood a chance.

It was a hot and sunny summer. Some would say it was a heatwave and a drought. And we started to see signs of stress in vineyards in certain sectors. Things were better where there was a little rain.  But August was bone dry. In fact, there was no rain from June 15th to the end of October.

It was about this time that comparisons to 2015 cropped up. You could see ripeness rapidly approaching, and there was talk of harvest starting at the end of August.

The vines were incredibly healthy; no moisture means no threat from mildew or odium. No rot.  Good ripeness. And, for the first time since 2009….a normal yield! So, let the harvest begin!

And it did, in the last days of August.  What was most astonishing right from the start was that the perceived acidity levels seem OK.  Granted, there’s no malic acid, but the levels of tartaric acid seem to be compensating, and there is an over-all impression of balance.

And all this in a year that felt more like the south of Spain than Burgundy as we know it.  The only thing we can attribute the quality of 2018 to is the abundant winter rains, and the vine’s ability to go searching for water when it needs it.

We have two containers that have just arrived in the U.S.

In these shipments we have, of course, the latest vintages of wines you know and love. But we also have quite a few new wines and some incredible new producers.

One of the most exciting arrivals: The 2018 reds from Pierre Naigeon.

Wow, wow and wow sums up our visit to beautiful Cromey.